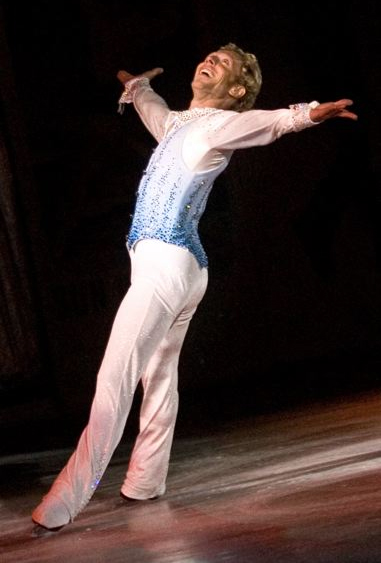 How lucky are we anyway? I am constantly thinking about how fortunate I am to be able to do what I love to do and then to get paid for it! I just completed a fantastic tour of Asia with Holiday on Ice —  Hollywood. We performed in Bangkok, Jakarta, Kuala Lumpur, Singapore, Hong Kong (over Christmas), and Taipei. Since I also write a travel column for a magazine, I had plenty of research to do in these exotic places. I love that part of the world so it is not a stretch for me to be there for an exended period of time. I will tell you about some of the crazy and interesting moments that I experienced over there.

After closing in Bangkok, I flew home to San Francisco for two weeks and then back to Jakarta where we performed for four days. Then, I jumped back on a plane and flew to Hawaii for two weeks to skate and vacation until I had to head back to Kuala Lumpur. The air miles were piling up fast! The show dates were spread out so that is why I was able to be such the jet-setter. I did stay with the tour for the remainder of the tour, which was fantastic.

In Singapore, I helped teach a seminar to the local skaters. I had done this a few years before while in Singapore with Disney on Ice-Toy Story. It is always interesting teaching kids from other parts of the world. Ice skating is our common language though, so we can always communicate.

In Hong Kong not only was I performing in the shows, but I was waking up early in the morning and taking the train to the mall so that I could work with a few of the skaters that I knew from them coming to Sun Valley, Idaho (where I teach and perform in the summers) the summer before. Yes, I was tired, but it was a joy to be able to work with them and feel like I actually lived in Hong Kong for a few weeks!

Then, I flew to Taipei for an advanced publicity tour for our show. I had a fabulous time and became somewhat famous on TV and in the newspapers while I was there. Who is famous in Taipei? It must have been the blonde curly hair! I think that I was on TV there just about every day! Maybe I’ll have to go back soon. During the final performance, I was handed a beautiful bouquet of 26 roses in the finale. Wow! It was from a fan, apparently. I love Taipei!

As you can see, I had a wonderful time filled with great experiences and interesting moments. This is the kind of life that I feel so fortunate to live. Now, I am home in San Francisco getting ready to skate at a birthday party in Birmingham. Joan Jett is playing at the party too. They built a rink in the backyard and she wanted a skating show. I love it!

These are just a few of the moments that make my professional skating life a dream come true. I want to skate until I drop.

How Lucky We Are