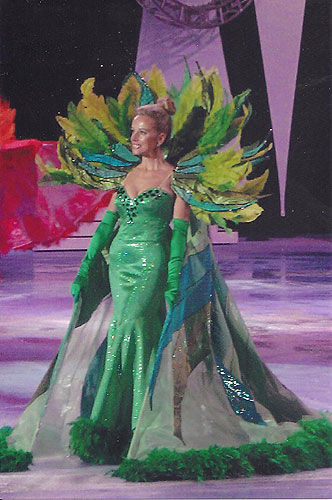 Originally from Poland, Jola Iglikowska started her pro skating career in 1969 in South Africa with Producer Marjory Chase. She went on to skate with Holiday on Ice/Europe until 1976. From 1976-1981, she skated with Ice Capades, and in 1984 she performed in Fire ‘n Ice/Las Vegas at the Hacienda (Producer Jerry Jackson).

She then went to skate in Japan for Producer Rick Porter and later returned to Las Vegas to do “Nudes on Ice” at the Plaza Hotel in downtown Las Vegas. More recently, she appeared in Legends on Ice in 2004 and played with the show in Long Beach, California and Caesars Palace, Las Vegas.

Where is she now?  Jola is now married to Mike Bench and has remained in Las Vegas. Her Mom (“Momma”) has moved over from Poland to join her. Jola has a real estate license and is actively involved in the housing market. She also works at Neiman Marcus on the Las Vegas Strip. Jola says, “I am blessed!”